I’ve been away; to Hamburg and to Turkey, with Walter. I took along a selection of drawing materials hoping to find some time to draw, and was glad I did as I found it a welcome relief at times, to sit and draw.

I also went walking on my own, with my camera, and took lots of photos of the lanscape and small details of local life. The

area we were, the Bozburun Peninsula is still wild and relatively unpopulated, but it is fast being taken over by indiscriminate developments. Some of this is on the wild hillsides surrounding Walter’s house, and it hurts my heart to see the huge, ugly diggers desecrating the landscape, scraping away the maccia, home to such a variety of wild-life, insects, lizards, birds and mammals, and the domesticated goats and sheep which are grazed there.

I was fascinated by the daily life of these animals and their owners, the goat-herds and shepherds who wander the rocky hillsides, in the heat of the day, coming home at sundown.

The house is very basic; few mod-cons. I used some of the kitchen equipment and simple ornaments as subjects for the drawings I made. The sun rises quickly in that area and the house is open and airy and full of light, so it was not really possible to arrange the objects so that the light was coming from one direction.

The drawing here: Retsina Jug was me forcing myself to use hatching, which I do not enjoy, but was determined to try, having seen these etchings by Giorgio Morandi, in the Estorik Gallery in London.

Giorgio Morandi.Still Life of Vases on a Table 1931

I found it difficult to make consistent lines and became bored with the background. I think it was a mistake to use two colours (of ink pens), but I wanted to break the composition up. This taught me that I am not good at repetitive close work. I do like the stylised look, however.

The charcoal and pencil drawing of Dried Flowers, I felt may not fit the brief, but I need practice at anything, just to become more confident with using the materials, and I’d never used the chalky coloured pencils before. The subject attracts me. I gave the flowers, while still fresh, to Walter when I left his flat in Hamburg, 4 months previously, and he kept them undisturbed, as I’d arranged them. I was touched to see them preserved, yet somehow neglected. (This is a characteristic which I see in him.) I like the forms and trying to capture the delicacy of the grass seeds. I think I managed the tonal contrasts quite well,  by allowing the paper to show through, and adjusting the pressure I used. I had in mind an oil painting by Thema Hulbert which captures a vase of dried flowers, using similar colours.

Another painting of hers, of shutters, inspired me to draw the shutters in the house in Turkey. Again, this does not follow the brief, but the subject was there, and the inspiration in my mind, and I did not want to lose the opportunity.

The drawings of the teapot, sketches, I suppose, although I have little idea of where the difference lies, I did to see if I could get the shape and perspective (difficult for me still) and I tried in two different media. The brush pens in my hand produce a much more stylised drawing. (Not sure if this might be called an illustration. Again I don’t know where the difference is between drawing and illustration.) I am happier with the pencil drawing, as I think the instrument is more forgiving of my inexpertise.

The same applies to Still Life with Three Objects.

I had a go at drawing a coffee pot and kettle in pencil and charcoal. 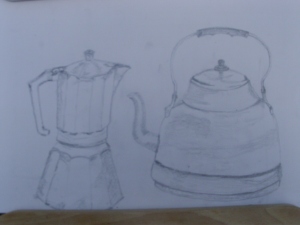 The next two, Unstrung Clown Suspended and Tattered Mind are very personal pieces. I have suffered with severe mental illness and there have been times of frightening mental instability when I’ve been in Turkey. The poor clown puppet, who hangs, disregarded from a sort of gallows, signifies something deep within me. Tattered Mind  is a natural sculpture (I hope not too grand a way of considering it), I made from pieces of flotsum I picked up from the beach, having swum across a large bay to try to escape my demons. The drift wood I collected on the other side of the bay and swam back with, with the objects tied to it in an old plastic bag. It was a hard swim, and at times I wondered if I would have to ditch my cargo, but I was determined to swim on. It was highly significant to me to challenge and triumph over the difficulty, and I had a clear idea of what I wanted to produce with my objects – a sculpture that captured the disorganisation of my mental state. I look on the slowly disintegrating result of my efforts with compassion, and I wanted to draw it before it disintegrates entirely. 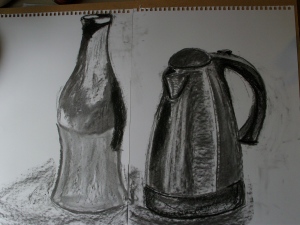 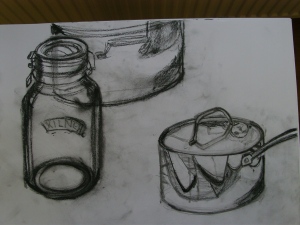 I think I am improving, and I find it more interesting than the previous exercise. I still need to work on the gradation from lighter tones to middle and darker.

I used pencil and graphite as well as fine pens and brush pens and charcoal, but as usual prefer the results using the charcoal. 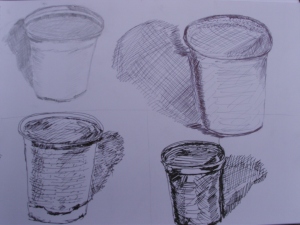 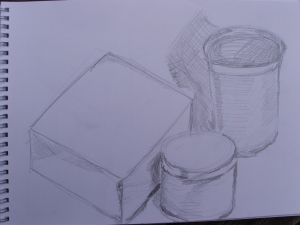 This was difficult because of hatching and the objects were no inspiration to me to persist in my efforts to be accurate with the shapes. My attempts are very poor. I was sitting outside in bright sunlight. The sun was quite high so the shadows fell behind the objects.

I still need to work on my observation of shadow and tones of shadow, and then the depiction. I am more attracted to the flatter work in still life than I am in the clearly 3D and maybe this affects my drawings?

I tied this exercise several times on paper “with tooth”, as I understand the term. I used watercolour paper and found it difficult to acheive a smooth effect. Perhaps this is the point? 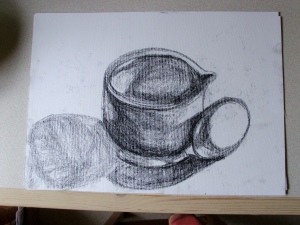 As I tried I was reminded of Mary Davidson’s discussion of the method used by Seurat, in her book Contempory Drawing. She says it is a difficult method and requires great patience. She copied his drawing of his mother. My still life is so much simpler a composition, but still I found it very difficult. Confusing to my eye to concentrate on the negative spaces, and I din’t acheive this at all, I don’t think. I have also outlined some of the shadows, which is “wrong”.

I am happier with the drawing I did on smoother paper. By this time I had become more confident with the shapes, and so it flowed easier.

I started using charcoal, as I find it easier than pencil, more forgiving. I used the rubber to delineate the objects. The paper was probably too smooth, but I managed. Using a shaded-in background as a starting point meant I placed less reliance on outlining. The result is a muted representation.

I tried the exercise with pencil and was frustrated by my need to outline, and not very happy with the shading and tonal values. I find it difficult to be precise and patient with cross-hatching. Tonal shading with the side of pencils of different hardness is easier for me. 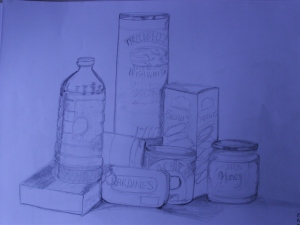 I had another go using different objects placed more naturally, and using pencil. This was a rough attempt. I was quite pleased with the plastic bag of onions which is more gestural than the other objects. 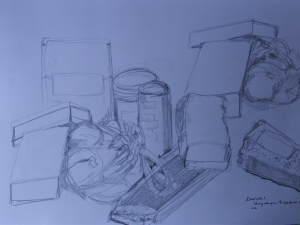 Overall, the exercise highlights my lack of expertise with a pencil and my greater confidence with a looser approach. it leads me to question if it is necessary to develop more skill in the detailed approach if this is not what appeals, or if it is avoidance of hard work to continue with what is more comfortable.

Already irritated by a day of trying to set up this blog.

Decided to make first experiment “Irritated”, as didn’t need to get into the mood, already there! Sharp jagged lines, quickly made. Further irritated by noise of tool on the paper.

Next tried calm. Found this calming just through process of doing it. Marks smooth and wide and curved. soothing. Noise like the sea, gentle or a soft breeze. not concerned if marks fell off the edge of the paper, as if drifting down. Very light pressure.

Angry similar to irritated in shapes, but closer together, much firmer pressure. Scribbling with force and spite behind the gestures. Noise of tool grating, intrusive.

Joy quick sharp fleeting marks. No sooner on the page than they disappear. Short-lived, transitory. like a sparkle, almost can’t believe it was there. Light pressure sometimes, sometimes more intense but always momentary. 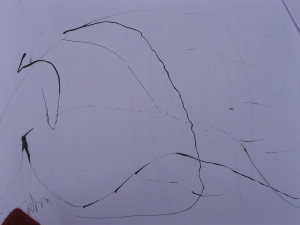 I need to loosen up more in my approach to the concept of “drawing” as it seems my approach is too narrow. The work had little meaning or impact for me, until I knew how it was produced, and even then, the remoteness of the mechanism of its making gives it a quality of detachment, whilst the process feels contrived. I did not feel any emotion on looking at it. My “thinking brain” rather than my “feeling brain” became engaged in a consideration of the dancers who participated in making the work, and I wondered what, if anything, they felt whilst pirouetting. Did they feel like artists? Can they be considered as artists? If not what are they? Are they like the pen, the stick of charcoal etc.

I follow two local artists Debbie Locke and Sara Dudman who are working on a project “Flocking together”. This is a collaborative venture and entails webcam footage from sheep, the farmer, a webcam flying over a flock, a webcam attached to the sheep dog. the works are built up in layers using the webcam footage translated through a drawing machine, and drawings made by Sara directly from her observations of the animals, their behaviour and their interactions with their environment. The finished works are a composite of many different sources of data. I was going to say that the most meaningful contribution is that made by the artist Sara, who holds the paintbrush or the charcoal and makes the marks, but I think I am wrong. None of it would stand alone. It’s impact results from the process of its composition and all its composite parts.