The gallery is in a Georgian building. It is small and intimate. It houses Italian paintings from the first half of the 20th century – the Estorik collection. Estorik was fascinated by Futurist painting and this was the focus of his collection.

He also collected figurative art fro 1890 to the 1950s. I liked the drawing by Emilo Greco titled Head of a Woman, for the use of simple, quick strokes, (see my rough sketch). Although this is a portrait, it is relevant to the drawing exercises I have been doing as it captures shade and tone using lines and minimal hatching. I was interested to see this and another portrait (see photo) as I was due to visit the marlene Dumas exhibition at the Tate modern the following day. 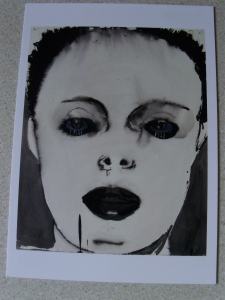 The Morandi still life etchings, watercolours and oil paintings are beautiful. the detail cross-hatching in the etchings is incredible, and they demonstrate the play of light and shadow on the objects which is central to the study and practice in the first part of Drawing 1. I was interested in the “negative silhouette” effect in Still Life of Vases on a Table (see photo). The oil still life paintings use a muted grey palette. the objects are simple and the background sparse. The works have a flatness which I like, and the brush marks can be seen clearly, especially in Still Life 1946. 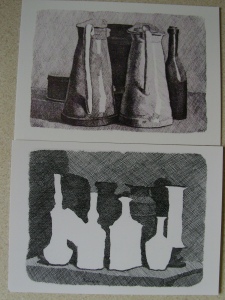 Massimoo Campigli’s Shop Windows 1945, a watercolour over lithograph also flattened the objects, some of which are surreal. I like the framing effect of the window structure and was reminded of an oil painting entitled Pewter Cabinet,  I’d seen in an exhibition of amateur art in Tiverton.

I was staying at my brother’s and took some photos of some of his ceramics because they reminded me of the shapes in the paintings. Perhaps they are from the same era, I don’t know.

The highlight of the day was the Modigliani exhibition A Unique Artisic Voice. This displayed “rarely seen drawings dating from the early years of Modigliani’s career, providing a fascinating and revealing insight into the artist’s distillation of a style unmistakable for its purity, simplicity and grace.” 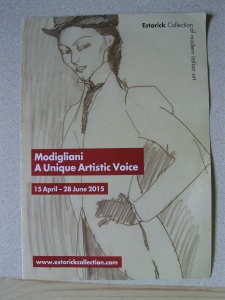 Modigliani’s Portrait of a Seated Woman 1910 has exactly the three qualities noted above, and once again my attention was drawn to the use of loose hatching to delineate and to emphasise certaing features on the work. The beautiful dark curve of the woman’s right shoulder and the lean of her head, flowing into her dark hair. the darkness and thickness of her hair balanced in the composition by the loose hatched shadow in the right lower corner of the drawing, below the woman’s left elbow.

The sketch below is my attempt to capture something of the sense of it.

I was reminded of another portarit I had seen in the RWA in Bristol, in the exhibition  of John Ingram’s collection entitled Drawn. This was a portrait of his wife Margaret Greaves. The pose was somewhat similar, but viewed from the side. The model has a limpid gaze. She stares into the distance, trance-like, detached, unreachable. I was struck by a horizontal line painted across the canvas, at the level of the model’s shoulders. To me it signifies something of the cut-offness of the model’s state of mind.